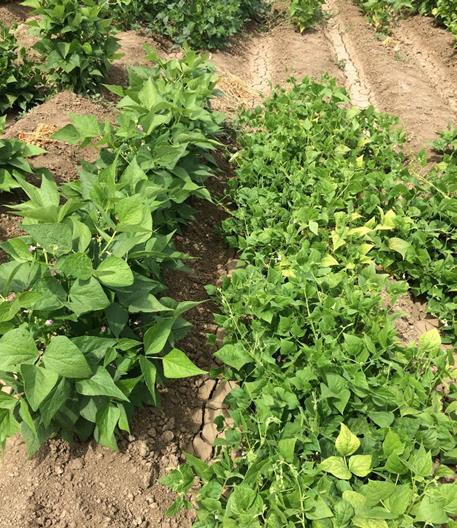 Conventional cultivars of Phaseolus belong to two major classes, dry beans vs. green beans, and each of these classes includes several market categories. These categories, however, represent only a paltry fraction of the available genetic diversity available for these species. For example, in the US, cultivars of dry beans mainly fall into the pinto, navy, small black, pink, and red kidney types, but other market classes are not represented. The organic industry has identified a business opportunity by focusing on alternative market categories, which often have more vivid seed colors and patterns than existing cultivars.

Seeds with such characteristics are often found among heirloom varieties, which are landraces or obsolete cultivars generally grown on small acreages by specialty producers or in backyard gardens. While these heirloom varieties provide interesting breeding targets and can have interesting agronomic or consumer traits, they are also deficient in other traits; in other words, they do not satisfy modern bean breeding criteria.

All common bean cultivars released in North America have resistance against Bean Common Mosaic Virus (BCMV), conferred by the dominant allele at the I locus. Given the absence of necrotic strains of the virus (Bean Common Mosaic Necrotic Virus or BCMNV) in the US, and the population-level immunity that the I gene grants against those strains, there is no need to consider the recessive resistance genes bc-0 to bc-3 to protect I-gene-carrying varieties from systemic necrosis.

Introgression of the I gene can take place via marker-assisted backcrossing. The source of the I gene will depend on the genetic background of the target variety, whether Andean of Mesoamerican (different domestications). The I gene has been mapped at one end of chromosome 02 and linked markers, such as SW13 and Bng45, have been identified, which can be used to follow the I gene through successive generations of backcrossing. Following backcrossing, the presence of the I gene resistance has to be confirmed by inoculation, before proceeding to field evaluation of the performance of backcross lines and production of breeder’s seed.

Many heirloom varieties display problematic growth habits. Low-growing plants with long internodes tend to spread into furrows, shortening the timeframe when weeds can be mechanically cultivated from the field. Varieties that set pods on the ground are not conducive to direct harvest, and many of these pods can rot if furrow irrigation is used. Populations that segregate for growth habit can be made by crossing heirlooms with varieties displaying excellent growth habit. The pedigree method can then be used to select individuals with desirable seed characteristics and plant architecture.