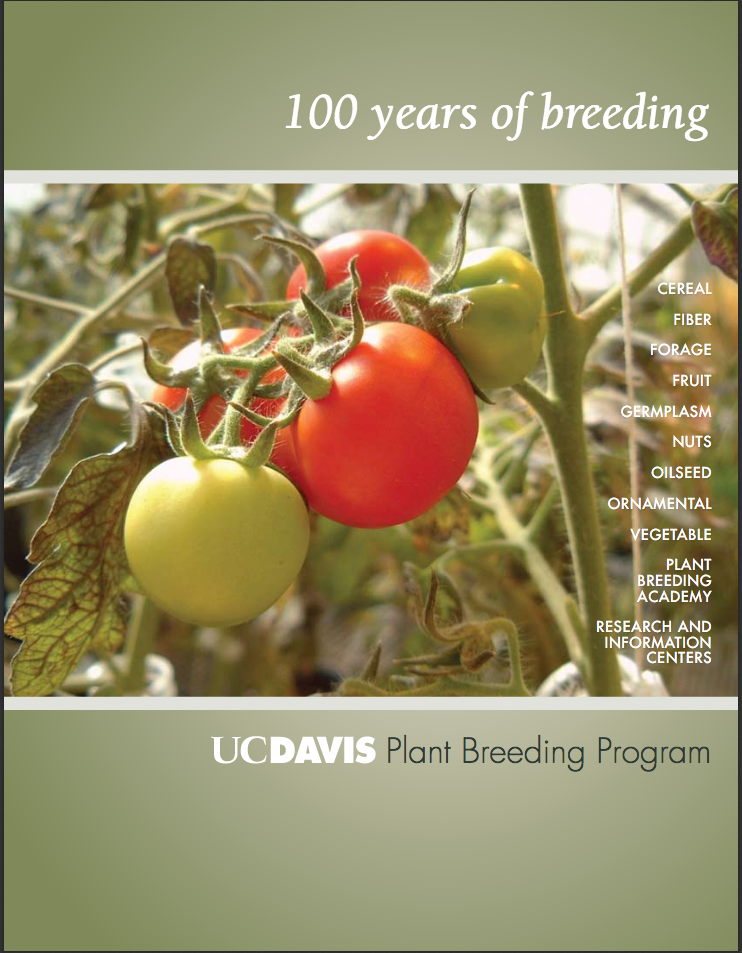 Summarizing 100 years of history in plant breeding at UC Davis is a formidable task. As a land-grant university, UC Davis has played a major role in developing and managing many of the more than 350 plant commodities now grown in California. The diversity of crops ranges across vegetables, fruits, nuts, grains, forages, ornamentals and turf. In the early 1900s the focus was on a few grain crops, and has expanded considerably since that time. The application of plant breeding and training of breeders at UC Davis focused on the unique and diverse California environment, allowing not only California, but the United States and in many cases the world, to enjoy fresh produce throughout the year. This publication captures the impact that UC Davis has had on developing crops through plant breeding over the last century and just as importantly, highlights the people who have made this possible. Read more in 100 Years of Breeding.

Over a research career devoted to the genetics of resistance and the breeding and improvement of cereal grains, Fred N. Briggs earned himself a reputation as a pioneer in the application of genetics to crop improvement. This status is due in large part to his development and advancement of a breeding technique that has been called one of the significant plant breeding developments of the 20th Century.

If you’ve ever eaten a strawberry, the odds are that you’ve had a taste of Royce S. Bringhurst‘s handiwork.  When it comes to strawberries, history is divided neatly between pre-Bringhurst and post-Bringhurst.  In 1950, California had two low-yielding strawberry varieties.  Nearly four decades of work by Bringhurst and his long-term research partner Victor Voth, however, brought this number to over thirty and established the strawberry as an economically-significant crop for the state.

While Gordie C. Hanna‘s research encompassed the breeding and production of tomatoes and asparagus as well as variety adoption studies with cabbage, broccoli, and sweet potatoes, the legacy of this much celebrated Davis alum and staff member is his cultivar VF145, the world’s first mechanical harvesting tomato.  When he first began trying to breed such a tomato in 1942, Hanna kept his idea to himself, unsure of what others at the university would think of it.

Paulden F. Knowles‘ interest in new crops for California agriculture led him to a research career focused mainly on oil seed crops, in particular safflower.  Due in large part to his research, safflower was shown to be well-adapted to California and consequently became established as an economically important crop in the state.  In the late 1950’s and mid 1960’s, Knowles traveled over 32,000 miles with his wife and son overland across North Africa, the Middle East, and South Asia gathering germplasm of wild and domesticated safflower species, an effort which produced most of the species now in the USDA world safflower collection.

The idea to explore Afghanistan’s remote regions for crop plants that could be grown in California came from renowned UCD horticulturalist Harold P. Olmo.  In the 1930’s, he joined a cadre of “plant explorers” who traversed the Afghan mountains by horseback and camel in search of wild and cultivated varieties of fruits, nuts, and grains.  As his career progressed, Olmo came to focus his attention almost exclusively on grapes, becoming not merely a grape geneticist and breeder but also a kind of grape archaeologist.

Considered the world authority on the genetics, cytogenetics, and evolution of the tomato, Charley M. Rick, Jr.‘s 42-year career at UC Davis is legendary. Part Charles Darwin and part Indiana Jones, Rick was as much at home in his campus office, laboratory, and greenhouse as he was in the Andes, the Galapagos, and other places where he repeatedly went in search of wild tomato genetic materials which might, through crossing, improve the tolerance of domestic commercial varieties to drought, salinity, cold, and other stresses.

Honored for his research on induced mutations in rice genetics, J. Neil Rutger was very successful in developing high yielding, semi-dwarf rice cultivars and valuable germplasm lines.  In his research, he developed methods of asexual seed production in rice (apomixis) and searched for transposable genetics elements to use as “tags” for cloning genes whose primary products were unknown.

Over his 39-year career at UC Davis, Charles W. Schaller won international renown for his work on California barley. His professional interests in plant breeding methods, the genetics of disease resistance, and host-pathogen interactions led him to identify numerous genes controlling resistance to the major barley diseases. The 10 barley and 3 wheat cultivars he developed and released were high-yielding, early to mature, and disease resistant.

A seminal scientific figure of the 20th century, G. Ledyard Stebbins at the time of his death had established himself as the world’s leading authority on plant evolution.  Working with eight other scientists, he was one of the architects of the intellectual watershed known as the “evolutionary synthesis,” wherein knowledge from the study of fossils, genetics, cells, and the evolutionary history of organisms was incorporated into the theories of Charles Darwin, modernizing them and creating the field of evolutionary biology.